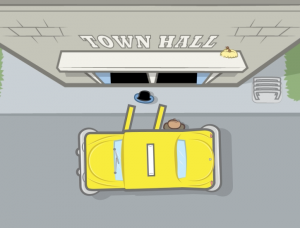 I recently finished up a cartoon that will be used in an educational video at AIMS Education Foundation. It’s a 1st Grade math video and this particular cartoon is to help exemplify in visual form what the on-camera talent is explaining to the viewer.

So, being geared to 1st Grade means the art must be simple and fun which tends to make cartooning easier. This is the longest one I think I’ve done yet and it’s not even that long. It’s amazing how much time is needed to draw and ink all the art that goes into a cartoon. The actual animation doesn’t take that long, thanks to Adobe After Effects and the like. Inking is really the longest process, which I do in Adobe Illustrator.

At any rate, this first video shows the rough animation using just the drawn art I did with pencil and paper which was scanned into Adobe Photoshop to tweak and then placed into Adobe After Effects to animate.

That rough was then used as my guide for the final which is below. I used the same After Effects project and just swapped the old art with the new inked art. However, this always poses a few issues in that the images don’t typically swap seamlessly, so tweaking and reanimating here and there often occurs.

I believe this project took me a couple of weeks if not three weeks. I’m not entirely sure, but again, the animating was done around 2 or so days; whereas the inking of the art took 1 1/2 weeks or so. I love doing this sort of stuff and always invite the opportunity to do some animating. I hope you enjoyed watching as much as I enjoyed making. 🙂

Oh, and before I forget, the lovely on-camera talent in this video is Erin Heasley.