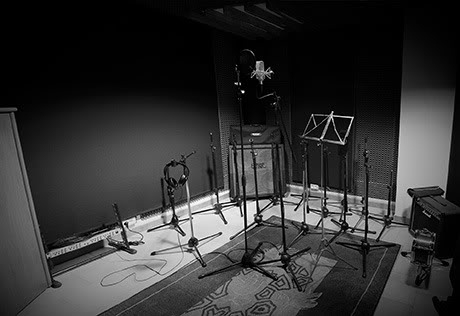 In the last post, I mentioned that I was to be receiving some studio goodies…including some acoustic treatment for the walls. Well, I arrived at home that evening to find some big ol’ boxes waitin’ for lil’ ol’ me. (Geez, that’s a lot of apostrophes!) Yep. The first shipment arrived. Since then, the other boxes of goodies slowly arrived one after another. Thanks goes to my dutiful (not to mention beautiful) wife who kept bringing them inside off the porch so’s no one would mischievously saunter off with one tucked under their arm.

So…what was in the first batch of boxes, you ask? Allow me to provide a picture guide of sorts as I opened and gazed at each one slowly throughout the evening. It took me an unusual amount of time to “unwrap my presents”, as I often sit and start daydreaming about how awesome everything in the world will be, now that I have ___________ (fill in the blank with the appropriate goodie).

So without further ado, and in the order I opened each goodie…

Well, that’s it for now. I’ll be posting some more pics of my other acoustic goodies I bought soon. Once I have my room set up, I’ll post pics of the end result.

All I can say is, I absolutely love getting new gear/equipment. It’s, it’s … superfly, brother. Very giddy and will sign off now.